How About This Photographer Who Plans On Having a Naked Photoshoot In Downtown Cincinnati On Opening Day? 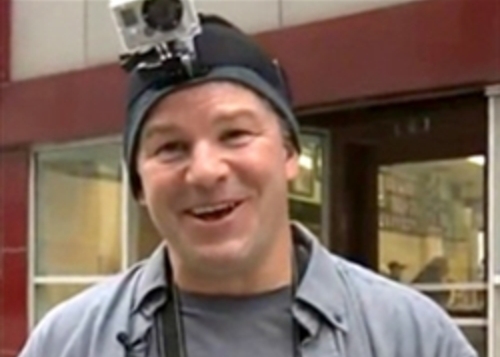 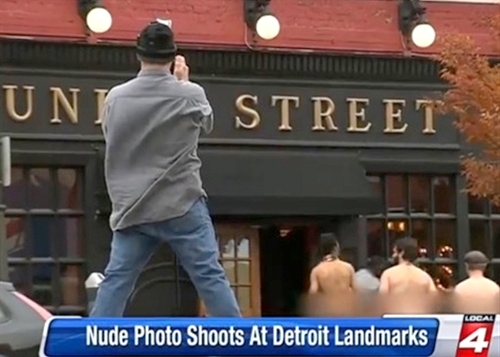 The Ann Arbor, Michigan, resident takes black-and-white photographs of nude people exploring famous landmarks and other public spaces around the world. Which is not exactly a universally legal concept.

His crew, complete with getaway drivers, is coming to Cincinnati to shoot around the city on Opening Day, Drouillard said.

He says he is coming to “pay homage” to the Queen City. He says he has some 100 potential shoot locations identified, but are keeping them secret.

So far, Drouillard has taken over 1,200 images of nudes strolling down sidewalks. Walking down the steps of a museum. Grabbing a drink at an outdoor bar. In 27 cities in North America, he said, including Detroit, Los Angeles and New York City.

Drouillard turns these images into prints, postcards, calendars and a book, “The Spirit of Lady Godiva.” He says a Cincinnati-based collector sent money to fund this trip.

Since the project launched 21 years ago, participants have gotten in trouble with the law a couple of times, he said, and the consequences have not gone much beyond a citation or a night in jail.

“I’m not trying to cause a commotion … Most of the people don’t believe (the shoot happened) because they didn’t see it,” he said. “It’s not a single ounce about sex. It’s just art.”

And why the risk? “A photograph of just about any location is one thing,” he said. The nude portraits “really make you remember it better.”

Drouillard also stressed that nude portraits are not exactly a new idea in the art world.

“You wouldn’t say Botticelli painted naked people,” he said of the Early Renaissance Italian painter most famous for “The Birth of Venus.” You know, the one with the goddess with strategically placed flowing titian hair – and nothing else – on a shell. “There is not a thin line between pornography and art,” he said. “There is a big, thick line.”

“I don’t even associate myself with pornography,” he said. “I am going to (Cincinnati) to embrace it and discover it – not to slap it in the face.”

So what is the message?

According to Drouillard, the series is not about nudity – it’s about how oblivious people are to what’s happening around them.

He also thinks more people than should be are oblivious to Cincinnati’s history and highlights.

“If you go to the Cincinnati Google images, 90 percent of (the photographs) are of the skyline,” he said. He wants his work to get closer.

Instead of the skyline, he said, he wants “to go into Skyline Chili.”

Well now I’m glad I took off work on Monday. As if heading to the Banks to watch the game wasn’t enough, now we get to snap a few dick pics! I honestly don’t know what I’m more excited for, seeing the Reds pecker smack the Buccos or watching the police chase a couple naked artists all over downtown Cincinnati. What a day. Say what you want about art and nudists and what not, but you certainly can’t knock the hustle. Guy is over here talking about getaway vehicles and spirit ladies and pornos and God knows what else. I don’t know, he lost me when he said he doesn’t associate with pornography. Dude’s real deal certifiable. He’s not just some hippie chick with an internet connection and an Instagram account, but like a legit off the rails crazy artist. So far out in left field you kinda gotta just let him do his own thing. I can get on board with that.

Also I love the “It’s not a single ounce about sex. It’s just art” bit.

That’s gotta be the new closing line at the bar, right? Getting ready to seal the deal with a hot babe and just be all like “Hey you wanna go back to my place and get naked? It’s not a single ounce about the sex. It’s just art.”

PS- Just so everybody is on the same page here, we’re all gonna take a peek at these photos, right? Ok good just checking.

Owner, operator Queencitybeerleague.com. AKA The Commish. Q-Ball is that asshole at the office who refuses to brew a fresh pot of coffee. Not because he doesn't want to, he's just too embarrassed to admit that he doesn't know how.
View all posts by Q-Ball →
This entry was posted in News and tagged Downtown, Harvey Drouillard, Naked, Opening Day, Photoshoot. Bookmark the permalink.