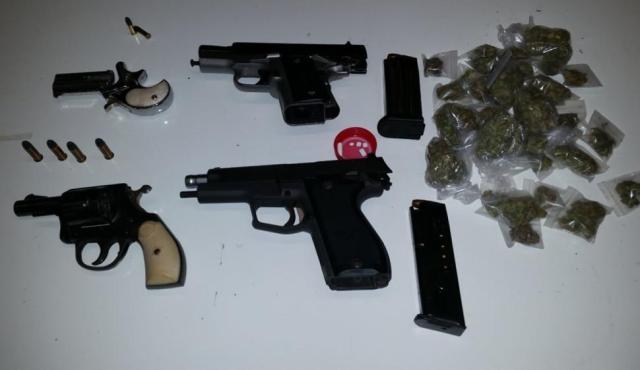 Three men and two women — including the set security guard — were facing weapons and drug charges after plainclothes cops infiltrated the shoot behind a Fulton St. Bravo Supermarket in East New York at about 6:15 p.m. and spotted the illegal hardware, officials said.

Those arrested included 35-year-old security guard Frank Bartlett, who had a defaced firearm in his waistband, 32-year-old Ronald James, who was seen passing a Derringer pistol to his girlfriend, Ebonee Eastmond, 27 — who was also arrested — and Edward Elkins, who had a semiautomatic pistol in a shopping bag between his feet, cops said.

Wendy Miranda, 30, who was in the video, was also busted when a .32-caliber revolver was recovered near her, cops said.

Coke Boy Records filmed the video, which paid homage to rapper Chinx, who was shot dead during a drive-by in Queens on May 17.

Other stars seen at the set — which drew a crowd of 150 — included Noreaga, Juelz Santana and Charlotte Hornets guard Lance Stephenson.

NY rap coming in HOT! Shit hasn’t popped off like this since 50 got clapped and back in the in the early 2000’s. First Chinx got gunned down (still don’t know who that is), now the boys in blue are setting up stings at NY rap heavyweight’s video shoots. The sneaky best part of the whole story that most people won’t even notice is former Bearcat Lance Stephenson being in the house. I had no idea that Lance hangs out with the likes of French, Elz, Ja, and the Dipset crew, but of course Lance hangs out with French, Elz, Ja, and the Dipset crew. That’s just how Lance Stephenson rolls. Blowing in Bron’s ear, celebrating free agent deals at a local strip club, and hanging out at rap video sets with burners, bitches, and blow. What doesn’t this guy do?

PS- Even though Ja Rule didn’t get arrested, I hope Ja can still make next weekend’s free concert. I didn’t go to law school, but if you’re a convicted felon I don’t think you’re supposed to be around guns and drugs. #FreeJa

Busta Rhymes looks like your favorite athlete that retired and you hadn’t heard from in like a decade but then he pops up out of nowhere and you’re all like, whoa! What the hell happened to that guy? I know what you want, Bus. It’s a cheeseburger.

Owner, operator Queencitybeerleague.com. AKA The Commish. Q-Ball is that asshole at the office who refuses to brew a fresh pot of coffee. Not because he doesn't want to, he's just too embarrassed to admit that he doesn't know how.
View all posts by Q-Ball →
This entry was posted in Music, News and tagged arrested, Busta Rhymes, French Montana, Ja Rule, Juelz Santana, Lance Stephenson, Rap. Bookmark the permalink.