Ya boy is off to play a little softball, so for the time being I thought I’d try something a little bit different tonight. A long time ago when I was writing for a couple sites in a galaxy far, far away, I started to draft a few pieces that I never really got finished because they were half baked ideas or I was too busy doing something else. So, I figured since I can’t write tonight I’d throw in this old post I started a while back about work league softball. I’ll be busy ripping dingers and flashing the leather out there on the diamond, so I figured a couple quick blurbs about rec league softball would play nicely. Let me know what you guys think and if you like this kind of stuff, maybe I’ll work in some more pieces like this here and there in the future.

Summer is BACK, you guys. The smell of fresh cut grass and the crisp, cool air highlight the return of shorts, outdoor day drinking, and America’s favorite pastime. There’s nothing quite like enjoying a tall, frosty, ale whilst taking in all the sights and sounds that make men and women of all ages romanticize about our nation’s greatest game… Oh, you thought I was talking about baseball? Ha! Au contraire, I’m talking about the glory, honor, and prestige that is corporate rec league softball. For many a workforce newbie, this summer session may be your first crack at the big time. But before you dust off the old glove and try to relive the glory days, just know that your work’s corporate softball team isn’t all it’s cracked up to be. You might be sitting there thinking that a couple long balls and diving snags might put you in good graces with the head honcho, but in reality, the diamond is just an extension of the office, and thus presents several awkward predicaments. Here are a few reasons why your corporate softball team sucks.

You Can’t Try Too Hard

Let’s face it, you’re the best athlete on the team. Not even close, really. The next best athlete is Stan from accounting, and let’s face it, he’s about one more knee or elbow brace away from looking like RoboCop out there. Theoretically, this should be a walk in the park, however, you might want to think twice before going full on Pete Rose. The key here is make yourself stand out just enough to impress your co-workers, but not enough to where you’ll be counted on to be the team MVP week in and week out. If your boss finds out that you were a borderline DIII talent, you’ll be expected to show up to every game and contribute, which is fine until that 9 you met at the bar last week wants to “hang out” Thursday night. Sure you can skip, but don’t be surprised if that stack paperwork is a little thicker than normal come Friday morning.

You Can’t Get Too Drunk

This one kind of goes without saying. Getting piss poor drunk and spilling the beans about that crush you have on Kelley from marketing generally isn’t a good idea in an office sponsored event. In fact, that might make for pretty awkward series of social interactions come Monday morning. Drinking in general is tough to gauge at these things. You’ll want to keep pace with your co-workers, but don’t overdo it, or everyone will think you’re that kid who still thinks he’s in college and refuses to grow up (Which is probably true, but hey, who’s judging? I’m in the same boat). There’s one of these guys on every team, in every league, from coast to coast. This guy probably spent more on this season’s gear than you did on rent last month. The thing about this guy is that he isn’t even all that good, but you wouldn’t know by talking to him. His dad body is more reminiscent of a washed up bartender than an elite athlete. He’s loud, socially inept, and he’s about to become your new best friend. Chances are he’s consulted when the lineup is made, and you’ll want to make sure you’re in the top half of that order. He also has that brand new bat that cost more than your monthly car payment. That thing can rake, too. Hell, Tina took it to the warning track with that thing. If she can do that, you should be dropping bombs like Hiroshima circa 1945. Goodbye entry-level sales, hello eight figure major league contracts. Make sure you’re on this guy’s good side.

“Oh, you’re batting Rod 5th instead of 6th? You sly dog… Good ol’ Hot Rod. I’d probably rank that move up there with Branch Ricky starting Jackie Robinson and breaking the color barrier in American professional sports. You’re a visionary, a master working within the medium of rec league softball.”

Your Degenerate Friends Will Want To Play 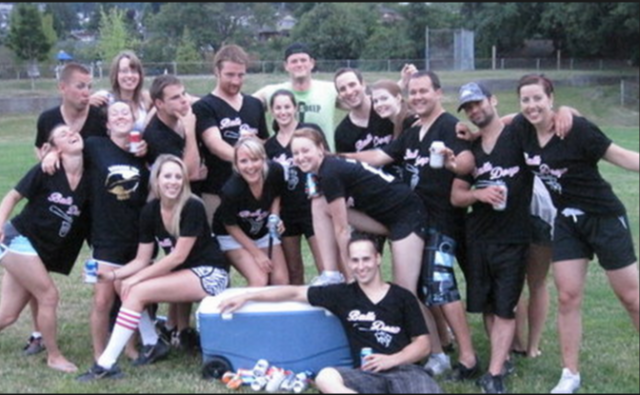 Much like the big leagues, the corporate softball season is a grind, capable of chewing up and spitting out even the most seasoned of recreational athletes. Let’s face it, come week ten, not too many of your co-workers are going to be real jazzed up about showing up for a 2-7 team. Forfeiting isn’t an option, as your penny pinching boss would rather see the fall of Western civilization three times over than have his workforce stiff him. Naturally, your college buddies will be more than eager to fill the void. Beware, however, as things could get ugly. To them, hearing “free beer and softball” means, well, free beer and softball. Chances are some of your co-workers think you’re a degenerate already, and the presence of your comrades whom you rarely see sober will only reinforce their opinions. Choose wisely or a tarnished office image and a stern talking to may be in your near future.

Welcome to the fuckin’ show, kid.

Owner, operator Queencitybeerleague.com. AKA The Commish. Q-Ball is that asshole at the office who refuses to brew a fresh pot of coffee. Not because he doesn't want to, he's just too embarrassed to admit that he doesn't know how.
View all posts by Q-Ball →
This entry was posted in Random, Sports and tagged Softball, Sports. Bookmark the permalink.