‘Fowling,’ the New Game That Combines Football and Bowling Is About To Change the Drinking Game Scene Forever 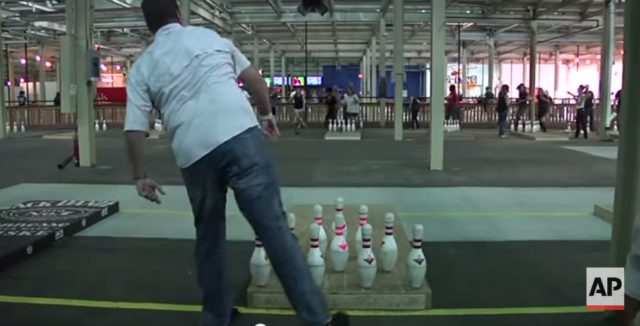 I don’t just want fowling in my life, I NEED fowling in my life. I’ve played a trillion games of cornhole, I retired from beerpong the day I graduated college, and hillbilly golf was just a flash in the pan. I need some new flavor in my life. Tossing the pigskin is great. Rolling stones and knocking back a few coldies is also great. Put the two together and you have something magical. I’m having a tough time buying that there’s only been 29 strikes in the history of the game, though. I mean, how hard can it be? Like if you gave me 20 throws I’d bet a prima nocte session with my wife on the night of my marriage that I could take down all ten pins with one tight spiral. The lady in the video said it herself: The game doesn’t really require any talent, even though that’s now really true because throwing a football takes a ton of talent. Maybe the real reason no one throws strikes is because everyone I saw in that warehouse is a can’t hack it pantywaist who wears his momma’s bra. Forget the hockey moms and dads, let’s bring in some real swinging dicks and see what they can do. I bet if Matt Stafford showed up to that Detroit warehouse and let it rip he’d be throwing strikes like Big Ern in Kingpin.

PS- I’m not sure if fowling has made it outside of Detroit city limits yet, but I need a couple of fowling lanes down at Rhinegeist and I need them there yesterday.

Owner, operator Queencitybeerleague.com. AKA The Commish. Q-Ball is that asshole at the office who refuses to brew a fresh pot of coffee. Not because he doesn't want to, he's just too embarrassed to admit that he doesn't know how.
View all posts by Q-Ball →
This entry was posted in News, Random and tagged Detroit, Drinking Games, Fowling. Bookmark the permalink.