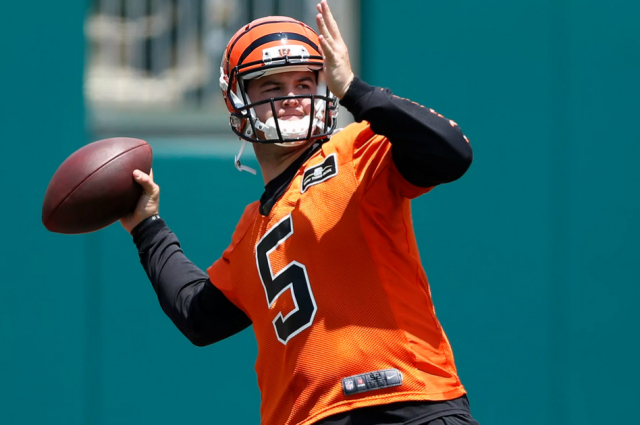 Week one and change is in the books. Here’s everything that went down.

AJ McCarron was anointed the second coming, then he sucked, then he got good again:

I don’t think there’s ever been a backup QB that’s never thrown a pass in the NFL that’s had more buzz going into a season in the history of mankind. Initially, McCarron would have had trouble completing a pass with a Nerf ball, which sent the “McCarron will take Dalton’s job by midseason” theorists running for the hills, but after a couple sharp performances running with the first team offense, McCarron looks like he’s back on track to lock up that no.2 spot in the pecking order behind Dalton. And NO, before you ask, barring injury he isn’t starting any games this season.

Tough to sit here and say that one guy whose never played a full NFL season is the most important player on the offense outside of Andy Dalton, but Tyler Eifert is the most important player on this offense outside of Andy Dalton. Even through that one quarter sample size last season it was pretty evident that this offense is tailored around Eifert and his ability to create matchup nightmares. Expect big things from Eifert this season aka he should probably be one of your sleeper TE picks for those of you in fantasy leagues.

Geno Atkins is back to being a one man wrecking crew:

All reports out of Bengals camp thus far are that the defense is manhandling the offense, thanks in large part to the return (sort of) of Geno Atkins. Coaches and media personnel are raving about Geno’s explosiveness and how much he appears to have reverted back to the player he was in ’13 before the knee injury, which is great because anyone that’s ever seen a pro football game pretty much agrees that old Geno was pretty much one of the best defensive players in the game.

Injuries continue to mount up:

Everyone takes a day here and there during camp, but big name players including Burfict, Jones, Ogbuehi, Hunt, and Johnson have all missed significant time.

Rookies DeShawn Williams, Mario Alford, PJ Dawson, and Derron Smith have all impressed coaches at various points thus far throughout camp. Wanna hear a bold prediction? Seventh round pick Mario Alford will not only make the team but he’ll finish third in catches behind Green and Eifert. Dude can flat out fly and knows how to play the position. Only reason he was a late pick is because of his size. I’m thinking Baby Hawk part deux.

Encouraging news from the LB corp as a starter and defensive captain is able to get back on the field. Rey takes a lot of shit from Bengals fans (myself included) and sometimes rightfully so, but if we’re going to be any sort of good this season Rey is going to have to be a man amongst boys out there. 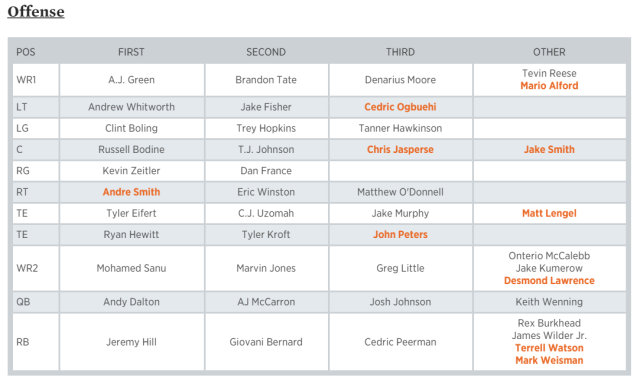 Pretty much as expected, not a whole lot of surprises so far. Most notably Dre and Pacman both getting the nod over Leon at CB, Sanu leapfrogging Marvin Jones as the no.2 receiver, and rookie CJ Uzomah locking up that no.2 TE spot behind Eifert despite being as raw an egg. Of course this is the just the preseason depth chart which is set in stone and certainly has no room for change whatsoever.

Owner, operator Queencitybeerleague.com. AKA The Commish. Q-Ball is that asshole at the office who refuses to brew a fresh pot of coffee. Not because he doesn't want to, he's just too embarrassed to admit that he doesn't know how.
View all posts by Q-Ball →
This entry was posted in Bengals and tagged 2015 NFL Season, Training Camp. Bookmark the permalink.