Well, it looks like that Raiders tailgate went about exactly as planned. Oaklanders hootin’ and hollerin’ at Bengals fans like Cersei Lannister on her walk of shame, little kids running around the parking lot fake stabbing people, that’s exactly why I didn’t sweat being unable to have made that trip out West. Gotta tip your cap to the Oakland fans, though. Doesn’t matter if they’re getting thupmed 30-0 or winning Super Bowls with John Madden at the helm, those guys show up and put on an absolute show in their own house. Kind of makes you wish that certain fan bases (not gonna name names) would stop arguing with each other over starting quarterbacks and playoff losses and make coming into our stadium about as safe as walking the streets of Clifton by yourself at 3 am for opposing fans. Take notes, Bengals Nation.

Every Oakland Raiders fan ever personified in one passage 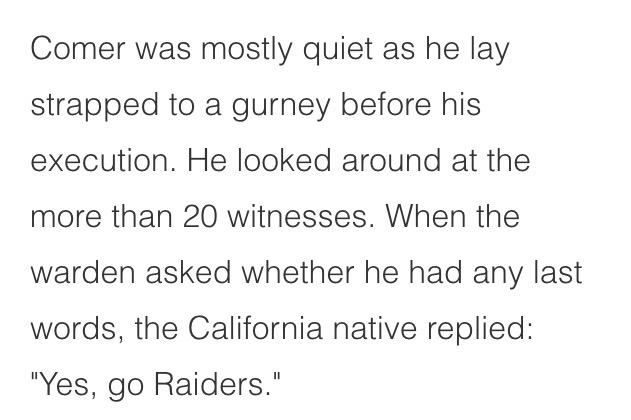 Owner, operator Queencitybeerleague.com. AKA The Commish. Q-Ball is that asshole at the office who refuses to brew a fresh pot of coffee. Not because he doesn't want to, he's just too embarrassed to admit that he doesn't know how.
View all posts by Q-Ball →
This entry was posted in Bengals, Sports and tagged NFL, Oakland Raiders, Tailgate. Bookmark the permalink.