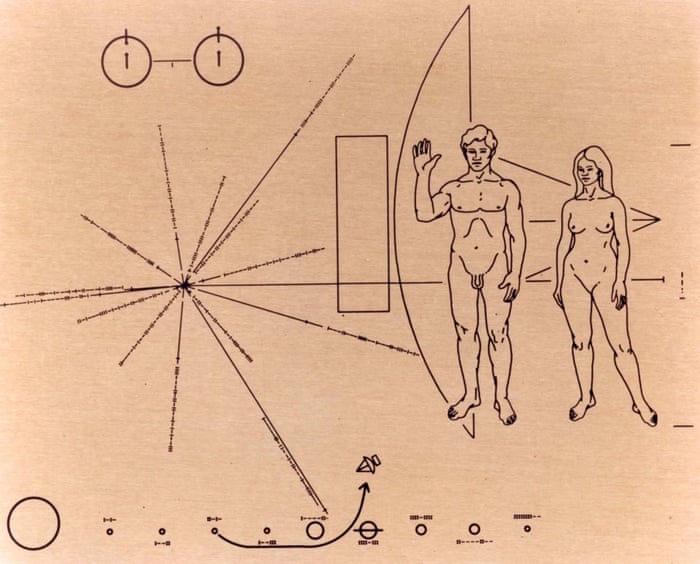 Messages sent into space to tell extraterrestrials about the nature of humankind should be updated to reflect gender equality and the diversity of life on Earth, scientists say.

At a conference in Leeds this week, a group of British astronomers and philosophers who form the UK research network for SETI – the Search for Extraterrestrial Intelligence – agreed to enter a competition organised by the Breakthrough Initiative to devise a message to send out to space on behalf of the world to whoever might be listening.

Jill Stuart, an expert in space policy at the London School of Economics, pointed to the plaque that was placed on the Pioneer 10 spacecraft, launched in 1972. Intended to convey the origin of the craft and to impart information about the inhabitants of Earth, Stuart observed that to modern eyes the pictorial message presents some issues. .

“The plaque shows a man raising his hand in a very manly fashion while a woman stands behind him, appearing all meek and submissive,” she said. “We really need to rethink that with any messages we are sending out now. Attitudes have changed so much in just 40 years.”

The plaque also clearly portrays the human figures as white, and Stuart added: “I would be uncomfortable with sending out any images or messages that include Western-dominated material.” There are literally hundreds, maybe even thousands of questions humans and aliens would ask each other before we got down to the topics of racism and sexism. Things like, “So, what’d you guys think of ET?” Or “What’s the deal with those anal probes?” Or “Do you guys really want Elvis back that bad?” Like if you gave me a day or two I could probably write an entire novel’s worth of questions I’d like to ask visitors from the other side of the universe. The list goes on and on and on, but I actually think our racist, sexist messages to those extraterrestrial visitors could turn out to be a good thing in the long run. For example, when the alien craft sets down on the front lawn of the White House and Barack Obama comes out and says “nice to meet you. We’ve known you were coming for a long time,” that’s the perfect opportunity to point out how far we’ve come as a species. Come right out and say, “yea, we we’re a little more racist and a little more sexist in the 70’s, but that was 40 years ago. Back in the day women could barely even get a job and black people got sprayed with fire hoses for peaceful protests, but now #BlackLivesMatter and chicks earn 70 cents on the dollar. Look how far we’ve come! Give us another 25 years and who knows where we’ll end up? Now did you Monstar looking motherfuckers come in peace or am I going to have to tell Will Smith and Jeff Goldblum to saddle the fuck up?

Owner, operator Queencitybeerleague.com. AKA The Commish. Q-Ball is that asshole at the office who refuses to brew a fresh pot of coffee. Not because he doesn't want to, he's just too embarrassed to admit that he doesn't know how.
View all posts by Q-Ball →
This entry was posted in News and tagged Aliens, Extraterrestrials, Feminism, Racism, science, Sexism. Bookmark the permalink.