Am I Being Too Optimistic About This Bills Game On Sunday? 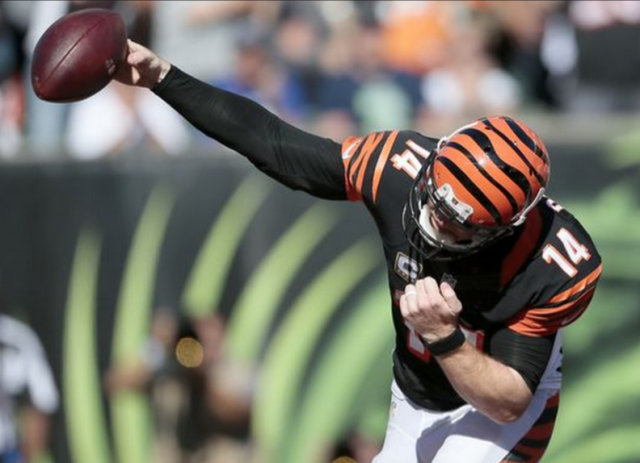 Q-Ball Sr. seems to think so. Even I thought we would take an L in my preseason predictions. The Bills have a dangerous team no doubt and going up to Buffalo and coming away with a loss is nothing to be ashamed of, but I just don’t see any way the Bengals are coming home with their tail between their legs on Sunday. Buffalo is sort of in a state of disarray right now. First EJ Manuel was starting, then not starting cause Tyrod Taylor was practicing, now he’s back to starting again-maybe. Sammy Watkins is making a big ol’ stink about not getting the ball, probably because he’s busy running wacky ass drills, all recipies for disaster when you’re getting ready to face a 5-0 team that’s firing on all cylinders. A lot of people are throwing around the words “trap game” in regards to this buffalo matchup on Sunday, but I don’t really think that applies for two reasons: a.) Buffalo isn’t shitty enough to be considered a quote unquote “trap game.” They’ll probably fuck around and be in the wild card discussion all year long so even if we go up there and things go south, when it’s all said and done I don’t think anyone will look back and say, “man, really wish we hadn’t have looked past that playoff team,” which brings us to b.) There is no team to look forward to. Bye week is next week. I know crazier things have happened and if there’s an organization capable of finding a way to lose a football game, it’s the Bengals, but the bottom line is that the Cincinnati Bengals are a better football team than the Buffalo Bills and that’s just a fact of life.

PS- If we do end up losing somehow I will thoroughly contemplate deleting this blog and acting like I didn’t jinx the team, but I won’t cause I don’t want to be a pussy. Instead I’ll just hope that no one read and anytime someone wants to ask me about it I’ll just deny I said any of these things ever. We clear? Good.

Owner, operator Queencitybeerleague.com. AKA The Commish. Q-Ball is that asshole at the office who refuses to brew a fresh pot of coffee. Not because he doesn't want to, he's just too embarrassed to admit that he doesn't know how.
View all posts by Q-Ball →
This entry was posted in Bengals and tagged Buffalo Bills, Ej Manuel, NFL, Tyrod Taylor. Bookmark the permalink.