How About Bill Murray Being a Xavier Fan? 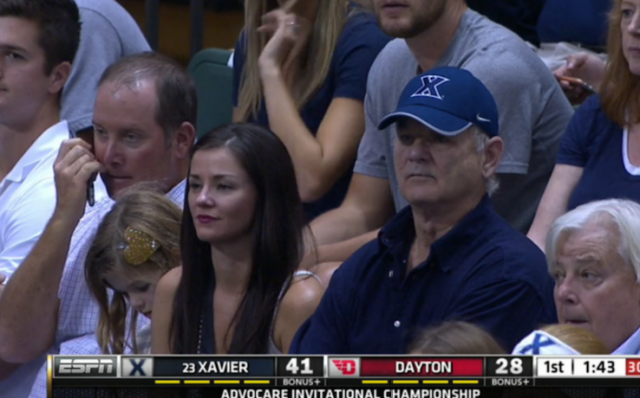 Bill Murray is at the USC-Xavier game. His son, Luke, is an assistant coach at Xavier. pic.twitter.com/YVf9ad8vQM

You want to hear a secret? It’s something that’s been on my chest for quite some time now and I just need to get this off my chest. I’m not really sure how to say this so I guess I’ll just go ahead and say it. Ready? Here goes.

I’m not really a Bill Murray fan. I’ve always been scared to admit that for fear of a public lynching cause everyone pretty much agrees he’s like the funniest guy of all time and goes apeshit any time there’s a Bill Murray sighting or referrence on TV, but I’ve just never really drank the Kool Aid. Don’t get me wrong, Bill Murray is hilarious and I totally understand his impact on cinema and the comedic industry. Caddyshack, Kingpin, Space Jam, and Groundhog Day are all good comedies, but there’s just a long list of guys I’d prefer to see before we get down to Bill Murray- even amongst the SNL crew. I knew Bill has always been a sports guy so I guess it really shouldn’t come as much of a surprise that his kid is hoops coach. Regardless of your opinion on Murray and whether or not you want to beat me with a spiked bat on account of my opinion, I think we can all agree that Murray on board the Cincy train is for the best.

PS- I’m not one to dish out much Xavier love, or really any Xavier material for that matter, but X honestly might be the most impressive team I’ve seen so far this season. Not the best, but certainly the most impressive. I had no idea they’d be as good as they are. They’re long, talented, deep, relentless, and they play together. Confidence is through the roof too. This year’s Crosstown Shootout is shaping up to be one of the better matchups in recent memory.

Owner, operator Queencitybeerleague.com. AKA The Commish. Q-Ball is that asshole at the office who refuses to brew a fresh pot of coffee. Not because he doesn't want to, he's just too embarrassed to admit that he doesn't know how.
View all posts by Q-Ball →
This entry was posted in Xavier Musketeers and tagged Bill Murray, College basketball, Comedy, Movies, NCAA. Bookmark the permalink.