There was a football game yesterday, Bengals vs. Ravens. Bengals started off slow, got a few stops, Tyler Eifert and AJ Green caught touchdown passes, Vontaze Burfict had an interception, Jeremy Hill ran well. At the end of the day, the Bengals football team was just too much for the Ravens football team. They stink, Ryan Mallett stinks. Curtains. The end. That’s all I have to say about that. I’ve been saying for like two months now that all I want is to just get to January and get to the playoffs and here we are with a date Saturday against the Pittsburgh Steelers. Thanks to zero help from Ryan Fitzmagic and the Jets or Philip Rivers and his millions of offspring Saturday will be what Bengals color man Dave Lapham refers to as “a good ol’ fashioned AFC North slobberknocker” and I for one can’t wait. A lot of folks are scared of the Steelers and a week or so ago I was in the boat, but I’ve since done a complete 180. A playoff tilt against those fuckers is so fitting it’s almost poetic. The Bengals get a chance to wipe the slate clean against their arch rivals. A team that dashed the Bengals Super Bowl hopes that rested on Carson Palmer’s knee ten years ago. A team that knocked out Andy Dalton for possibly the rest of the season (might get his cast off today. Fingers crossed) and Tyler Eifert on a a dirty hit. I know the Steelers are one of the hottest teams in the NFL right now and they always end up playing their best ball in January but I don’t care. The risk of an imminent defeat is EASILY worth the possibility of the sweet, sweet, taste of revenge and twenty something years of frustration coming to a head. If we win this city will burn. My Bengals couch will burn. Bring on the Steelers, let’s dance. 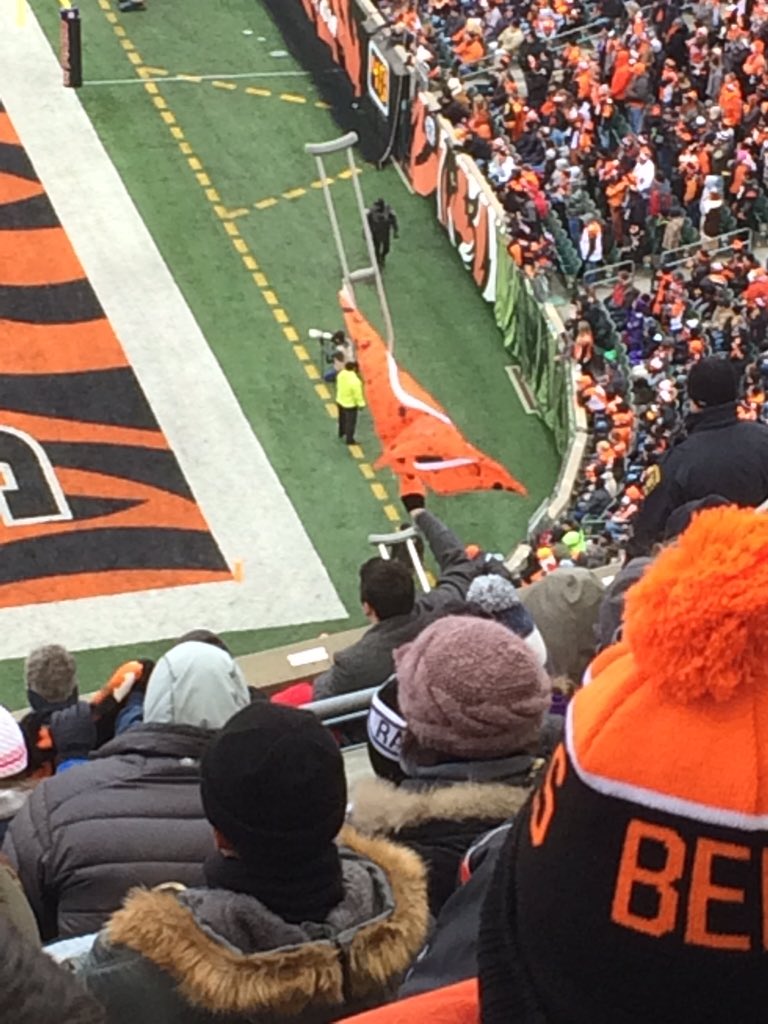 I had a chance to get down to the stadium yesterday and I saw this madman with his crutch flag and couldn’t stop laughing. Not sure why I thought this was so funny. Just an incensed maniac out there with one good wheel and unbridled passion and enthusiasm for the good guys in stripes. Last game of the season. Can’t hold anything back.

Owner, operator Queencitybeerleague.com. AKA The Commish. Q-Ball is that asshole at the office who refuses to brew a fresh pot of coffee. Not because he doesn't want to, he's just too embarrassed to admit that he doesn't know how.
View all posts by Q-Ball →
This entry was posted in Bengals and tagged Baltimore Ravens, Crutches, Flag, NFL, Pittsburgh Steelers, Playoffs. Bookmark the permalink.