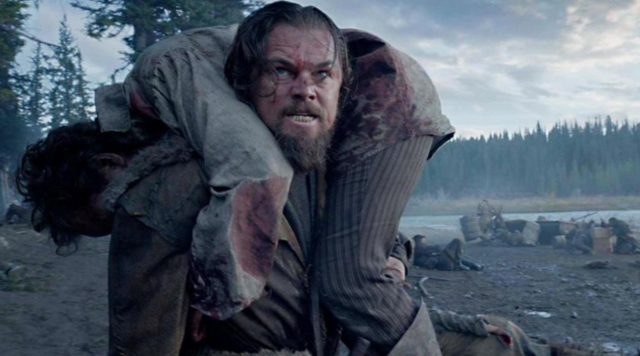 Author’s Note: I wasn’t gonna include the trailer ’cause I figured everyone had seen it already and could more or less guess the in’s and out’s of the movie, but I got home from the theater and told my roomate I had went and seen The Revenant and he looked at me like I’d I’d just spoken in fluent Navajo, so I guess there’s folks out there who still don’t have a clue. Crazy, right?

Back in the day I used to go see movies all the time. My sister worked at the Sringdale Cinema and could get me $1 tickets and seeing as I was still in high school living fake life with no real responsibilities I’d round up a couple buddies and a few vodka Gatorades (Popov plastic bottle, of course) and check out just about anything I found even remotely interesting. Nowadays I have to live a real life and I’m more of a bootleg movie and a sandwich on my couch type of guy so I don’t really get to the theaters that often, but a lady friend of mine asked if I wanted to go see The Revenant so naturally I was down for a night out to see the latest entry for motion picture of the year candidate.

Let me just get this out there from the jump, The Revenant is INTENSE AS FUCK. Right away director Alejandro Iñárritu hits you with an Injun raid on Leo’s trapping outpost somewhere in what I assume to be Montana or the Dakota’s right around the time of the French and Indian War. Arrows and knives and body parts are flying everywhere and it really doesn’t slow down until the final curtain. Make no mistake about it, this movie isn’t exactly for the squeamish seeing is it’s as gory as they come. Not like in a Saw or Texas Chainsaw Massacre type of way that tries to go over the top and make you lose sleep, but more in a way that was probably indicative of the times. Obviously I wasn’t out there on the trail, trapping and exploring the uncharted areas of the Louisiana Purchase, but the amount of violence and gore and referring to the indigenous populous as “tree N-bombs” seems… Let’s just say, accurate. Accurate enough to make you get a sense for what life was really like out there in the wilderness and accurate enough to make you feel thankful that you have Netflix and an Internet connection instead.

The only real beef I had with the film is that there were a couple scenes that seemed a bit far fetched. I promised I wouldn’t give out any spoilers and I won’t, so without giving away too much, there were some situations Leo had to endure that no real human being could ever survive. I’m talking bear maulings, falling off of cliffs, crawling out of frozen rivers soaking wet without suffering severe hypothermia, you know, that type of stuff. I know that most movies you’ll ever see, however realistic or not will have a few scenes that leave you a bit perplexed in that regard, so all things considered if that’s my only real beef with the film then we’re not looking too shabby. Honestly that’s probably just the spoiled, pussy, suburban raised white kid in me talking.

Speaking of spoilers, I have to apologize because I lied earlier. I am going to drop a spoiler on you. Ready? Ok here goes, Leonardo DiCaprio isn’t the best actor in the movie. I know he just won a Golden Globe and his role in The Revenant is supposed to be the one that finally lands him an Oscar, but if we’re being completely honest Tom Hardy acts circles around Leo. That’s not a knock on Leo either. Hardy is just that good. I don’t know if/when he’s going to be nominated for best supporting actor ’cause I don’t know who he’d be going up against, but if it were up to me I’d just mail the trophy to London or Whales or wherever the fuck he’s from right fucking now. Hardy plays that rugged, gritty mountain man that’s seen some shit sort of along the lines of his character in Lawless for those of you that are familiar with that film. Dude nails the hillbilly accent and in a movie filled with blood and violence and tough, frontier seasoned personalities, Hardy’s character is harder than a choir boy in a porn shop. Kinda makes me want to grow out my beard and smoke a handmade pipe and wear nothing but coonskin caps and only do shrugs in the gym from here on out. Tom Hardy, great actor with a great set of traps.

Also while we’re dishing out awards, I gotta give a quick shout out to my guy, director Alejandro Iñárritu. Again, I don’t know who he’ll be going up against for best director and/or best picture this year, but Alejandro is certainly deserving of both. Cinematically, everything in The Revenant is extremely well done. From the writing to the special effects, to the camera angles, to some of the shots of the surrounding landscape that are downright breathtaking. Like I’d mentioned earlier, sometimes it kind of feels like you’re actually there. Iñárritu was on stage the other night at the Globes and he absolutely cleaned up at the Oscars last year for Birdman, which I haven’t seen yet but if we’re judging strictly off the hype and what he was able to do with the Revenant, then I don’t have a doubt in my mind that movie kicks ass too. That’s two blcokbusters in a row for Iñárritu and if he churns out two or three more hits here in the next couple years we might be looking at the Spielberg of this decade.

All in all, The Revenant is an outstanding film that will probably be in contention for just about every major award at this year’s Academy Awards. I don’t think it’s any secret that the big one everybody will have their eyes on is whether or not my main man Leo wins his first Oscar for his performance in The Revenant. Right now, gun to my head, I don’t think he gets it. Eating raw liver and sleeping in dead animal carcass method acting be damned. Leo does an outstanding job as is typical of him at this point in his career, but I really wasn’t kidding when I said Tom Hardy out acts Leo in this movie. My two cents isn’t worth shit, but the Academy doesn’t give best actor awards to guys who get the spotlight stolen from him. Plus that guy who won for playing Stephen Hawking is up for his role as a tranny in that boring ass looking The Danish Girl movie so I’d be willing to bet a large sum of money he wins again. Regardless, The Revenant is one of the better movies I’ve seen recently and if you have a few hours to set aside or a good torrent site then you should definitely go ahead and pull the trigger.

Author’s Note Part Deaux: I wrote this article last night completely oblivious to the fact that the Oscar noms were dropping this morning. The Revenant: Best picture, best actor, best supporting actor, best director. Looks like the kid was spot on again.

Owner, operator Queencitybeerleague.com. AKA The Commish. Q-Ball is that asshole at the office who refuses to brew a fresh pot of coffee. Not because he doesn't want to, he's just too embarrassed to admit that he doesn't know how.
View all posts by Q-Ball →
This entry was posted in Movies and tagged Academy Awards, Alejandro Iñárritu, Leonardo DiCaprio, The Revenant, Tom Hardy. Bookmark the permalink.