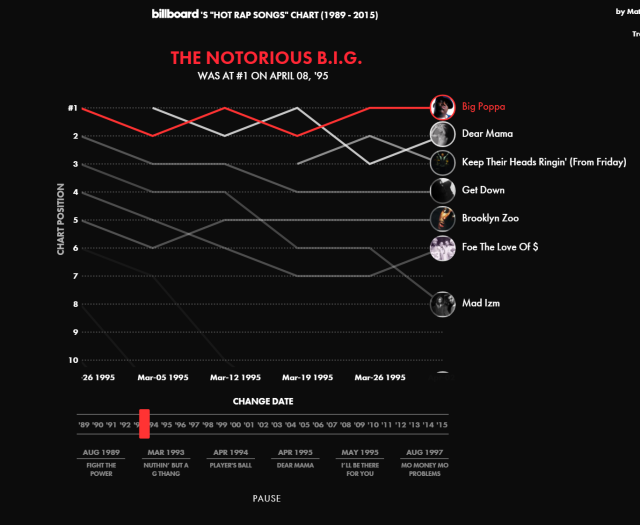 WARNING: This bad boy might (definitely will) crash your browser and drain your battery, so save all your important work documents that you won’t get done today before you bump.

Being the blogging extraordinaire and wordsmith that I am, often times I’ll speak in hyperbole and exaggerate just about everything I say, but I’m as serious as dick cancer when I say this interactive rap chart from Billboard might be the most fascinating thing I’ve ever seen on the Internet. No lie, I sat there at my desk watching the hits rise and fall for a solid half hour until one of my coworkers came in and busted me not doing any actual work. A must watch and listen for anyone who’s considered themselves a hip-hop fan over the last two decades or so. It’s crazy to think you kinda forget about some of the runs the rap game has had until you see this thing in action. That ’95 run with Dre, Pac, and Big claiming the top 3 spots and that run in summer of ’02 with “I Need a Girl (part 1),” “Hot In Here,” and “Oh Boy” might not ever be topped. All certified bang pieces that are still every bit as good today. And How about that run Wayne went on in ’08? It’s easy to forget how popular Wayne was nowadays with the shitty features and the goofy TrukFit pants, but just about every song from that Carter III album was on the charts and on your playlists at some point back then. Trust me, if you got an hour or so to kill listen to this thing from start to finish and reminisce to the jams that take you back to the days of your shitshow college parties and memories of old high school girlfriends. FAIR WARNING (in addition to the whole browser crashing thing), be prepared to feel old as fuck.

Owner, operator Queencitybeerleague.com. AKA The Commish. Q-Ball is that asshole at the office who refuses to brew a fresh pot of coffee. Not because he doesn't want to, he's just too embarrassed to admit that he doesn't know how.
View all posts by Q-Ball →
This entry was posted in Music and tagged Billboard, Music, Rap Music, Top 40. Bookmark the permalink.