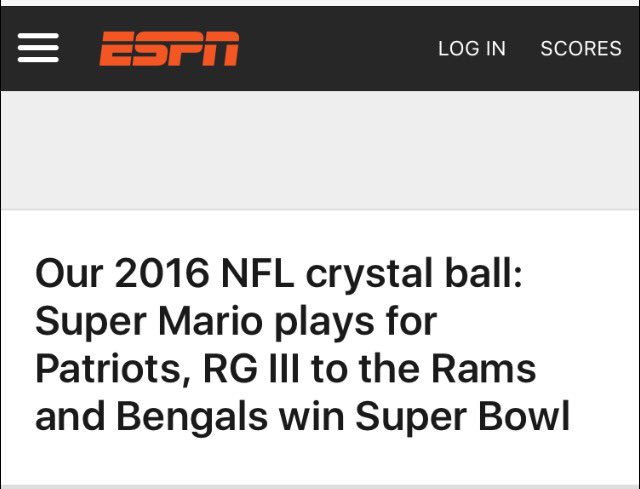 You know what? I’ve never been more excited to leave an entire season in the past. Put a lid on 2015. Button it up. Close the curtains. Take out the trash. stick a fork in it. 2015 was an awful football season. Actually, it was probably the worst I’ve ever seen. I don’t really care about Cam dabbing then pouting after a Super Bowl loss. I don’t really care about Sheriff Peyton Manning and his potential openly gay relationship with Papa John going out on a high note. All I care about is making it to the start of the 2016 NFL season. As a matter of fact, if Doc Brown pulled up in the DeLorean and offered to take me straight to September 8, 2016, I think I’d grab my bubble vest and Gray’s Sports Almanac and join him without even batting an eye. Forget spring, forget summer. Am I really missing anything? A March Madness in which my team is unable to compete? A 100 loss MLB season? One and only one sloppy random hookup if I’m lucky? Sounds like a ball. I just want it to be hoodie weather again. I just want drink an Autumn Ale and spend every Sunday stressed to the point of almost puking. I just want to get my hopes up slowly but surely only to have the chair kicked out from underneath me for the 27th straight year. I just want football to come back. Nothing else in life matters for the next six months. I want to see the Bengals win a Super Bowl and this is the year it’s actually going to happen because ESPN says it’s so and ESPN has never had a wrong prognostication or reported inaccurate information ever in their entire 37 year history.

Owner, operator Queencitybeerleague.com. AKA The Commish. Q-Ball is that asshole at the office who refuses to brew a fresh pot of coffee. Not because he doesn't want to, he's just too embarrassed to admit that he doesn't know how.
View all posts by Q-Ball →
This entry was posted in Bengals and tagged ESPN, NFL, Super Bowl. Bookmark the permalink.