In Honor Of MJ’s 53rd Birthday, Is Michael Jordan the Worst Dresser Of All Time?

There are certain things that we as a society just don’t discuss in a public forum. Body weight, personal salary, weird sex acts you do with your lady friends, stuff like that has been labeled taboo and any mention of it will likely be met with awkward silence and bewildered “fuck you” looks. Of all these awkward subjects, there’s one above the rest that has gone largely unspoken and I just can’t sit here in the dark anymore. It’s something that has been eating me up for quite some time now and if no one is willing to address the issue, then I guess I’ll be the one to fall on the grenade. Ready? OK, here goes. For the life of me, I can’t figure out why we as a species have allowed Michael Jordan to become a style icon. There, I said it. I know that will probably rustle a lot of Jimmies because Jordan is one of the greatest and most beloved athletes of all time, but in addition to being the greatest basketball player and Internet meme ever, MJ might just be the worst dresser of all time and I think in your heart of hearts you know that too. Remove the splinter from your eye. Allow me to be the one to show you the light.

cargo shorts for the win

Look, I understand the impact and the cultural significance Jordan Brand has had on the fashion industry. Jordan’s have always been and will always be the hottest ticket in the footwear industry. Mike could sell a pair of Cement 3’s to Lt. Dan. Kids will continue to camp out for days and kill each other and lose their arms for a chance to score a fresh pair of J’s. Maybe the coolest pair of shoes I ever owned were a pair of Jordan’s I had back in 7th grade because that’s what Huggins’ Bearcats were sporting at the time. I get it. What I don’t get is how a guy who gets his wardrobe from DXL has reached the pinnacle of the style game. There are plenty of other high profile athletes who dress like legit male models that haven’t even come close to having the same type of success that Jordan has had in the fashion industry. LeBron, Beckham and H&M, Tom Brady and his Uggs all pale in comparison to what MJ has been able to do. We even let this guy be on the cover of GQ for Christ’s sake

Look I love Mike. I love everything about him. His game, the trash talk, the bravado, but this man has been fooling us for years and it’s time someone puts a stop to this. 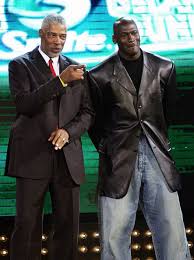 Owner, operator Queencitybeerleague.com. AKA The Commish. Q-Ball is that asshole at the office who refuses to brew a fresh pot of coffee. Not because he doesn't want to, he's just too embarrassed to admit that he doesn't know how.
View all posts by Q-Ball →
This entry was posted in Sports and tagged Fashion, Jordans, Michael Jordan, Shoes. Bookmark the permalink.