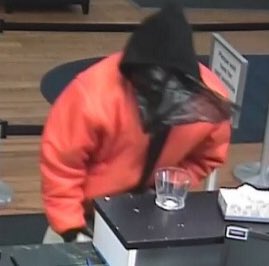 Yes, you are seeing this correctly . That's a shopping bag over this bank robber's face. @WCPO pic.twitter.com/mYzErKcPZe

Any idiot with a set of brass balls and a water pistol can rob a bank, but it takes a true crook to really leave their mark on the heist scene. Jesse James, Butch Cassidy, Bonnie & Clyde, John Dillinger. All world class bank robbers, all left their own indelible marks on history. It’s been many years since a true thief has captivated the masses by taking other people’s money (not counting guys like Belfort or Madoff. Yea they stole an ungodly amount, but for arguments sake you gotta actually walk into a bank and stick ’em up, not sit behind a computer to qualify here), but I think this bandit might be next on the list. Hombre didn’t even have time to raid his mom’s drawers for a pair of panty hose or run down to the Halloween store and score a Jason mask. This dude grabbed the first thing in sight and headed straight for the vault. No time to grab the dead President’s mask and plan out a detailed heist like Affleck in The Town. How’s that old saying go? Would you resort to stealing food for your family if you couldn’t provide food yourself? Well I think it’s time we put a modern twist on that old wise tale. Instead, how about we say would you put a Dollar General bag over your face and rob a bank if times get tough? When the going gets tough, the tough get going, and we’ll just go ahead and assume times are tough if you’re relegated to robbing a bank in Clifton with a plastic bag over your face.

Owner, operator Queencitybeerleague.com. AKA The Commish. Q-Ball is that asshole at the office who refuses to brew a fresh pot of coffee. Not because he doesn't want to, he's just too embarrassed to admit that he doesn't know how.
View all posts by Q-Ball →
This entry was posted in News and tagged Bank Robbery, Banks, Clifton, Crime. Bookmark the permalink.