Richard Hughes is faces a charge of making false alarms.

Officials said he repeatedly called 911, requesting that dispatchers call a life squad to take him to the hospital because he was drunk. Officials said the behavior has been “ongoing for months.”

Each time he was taken to the hospital, officials said Hughes was evaluated and told there was no medical issue.

It’s the day after Easter and I believe it was the good Lord himself who once said, “let he who without sin cast the stone first.” Well, I, along with most of you are guilty likely guilty as charged because anyone who regularly consumes adult beverages/binge drinks on the weekends has had our fair share of drunk dial fiascos. A couple vodka soda’s and whiskey sour’s down the hatch and the next thing you know your fingers are doing the tango across that iPhone screen like Barack Obama in Cuba after a terrorist attack. It’s a fate none of us can escape. You drink long enough and it’s only a matter of time before you cave in and make a call or five that you regret. Some worse than others. Here are the worst possible drunk dials you can make ranked in order:

This could be a friend of a friend or some chick you randomly met at the bar at some point in your life. You’ve probably creeped on her IG a time or five and you’ve finally worked up enough liquid courage to move past the subtle double tap and try for a more direct line of communication. That “He3YyyYy” message you fired off at 3:30 am has about a 50/50 chance of actually being answered but no man has ever accomplished anything great without taking a risk. Shoot your shot 2016.

Now I’ve never actually been dumb enough to drunkenly hit up anyone I’ve ever shared an office with, but I’ve had coworkers hit me up in the past so I guess that’s a thing? Conventional wisdom would tell you that DD’ing a coworker should be higher up on the list, but just about everything that happens in the office is already awkward anyway so what’s one extra little “WYD?” text gonna hurt? Kind of like throwing a match into an already blazing inferno.

I also didn’t know drunk dialing your Grandma was a thing either, but a friend of mine dropped this in the group text the other day and since it’s relevant to the topic I thought it was worth sharing 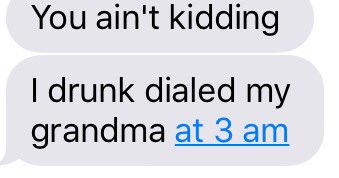 I believe I might have told this story on here already but one time I was in Chicago and got so drunk I accidentally hit up my Mom at like 4 am and didn’t realize it was her on the other end of the line ‘til she started screaming at me after about 5 minutes of conversation. Obviously not my finest hour and we haven’t really talked about it to this day still.

This one’s not even close. The king daddy of all drunk dials. There’s even been entire songs and albums written about drunk calls to old flames. Nothing good rarely comes from hitting up your old boo after the hours of 1 am complete with heavy alcohol consumption. Best case scenario, she answers and you probably end up fighting about whatever it is that made you guys break up in the first place. Worst case scenario she doesn’t answer and she knows that you got drunk and caved in like the little bitch that you are. Don’t worry though, bro. Only reason she didn’t answer is ‘cause she’s busy having a little sex with not you. She’ll call you back eventually. Maybe.

DD’ing 911 is in a category all of it’s own. Like I couldn’t even begin to imagine paying $30,000 in bail money + legal fees + court fees. I can barely pay my student loans and the Duke bill so tens of thousands of dollars on top of that would be nothing short of catastrophic at this point in my life. Moral of the story: When you’re drinking just leave the phone in your pocket, but when you get up the next morning, don’t even read your outgoing messages. Just don’t address the problem and if you act like those drunk texts never happened then basically they didn’t. I believe it was Jesus who said that as well.

Owner, operator Queencitybeerleague.com. AKA The Commish. Q-Ball is that asshole at the office who refuses to brew a fresh pot of coffee. Not because he doesn't want to, he's just too embarrassed to admit that he doesn't know how.
View all posts by Q-Ball →
This entry was posted in News and tagged Arrest, City of Cincinnati, Drunk Dial. Bookmark the permalink.