Encouraging Statistics and the Case for Offense at No. 9

Most mock drafts seem to have the Bengals locked in on defense with the ninth overall pick and rightfully so. Marvin Lewis has always been a defensive minded coach who has a penchant for DB’s and DE’s. With holes to fill at both positions, it’s pretty easy to see why an analyst forced to predict all 32 first round picks would have Cincinnati reaching into the Derek Barnett, Reuben Foster, Solomon Thomas potpourri.

That being said, my impression is that more and more fans (specifically on this site) want to go offense at no. 9, myself included. The logic stemming from what the Bengals already have as opposed to what we don’t have. Yes we need to get faster as a whole on defense. Yes we need an elite pass rusher opposite of Carlos Dunlap and Geno Atkins. Yes there is potential uncertainty in the secondary and along the offensive line.

On the flip side, however, the Bengals are still somewhat loaded on offense. Andy Dalton is a well above average QB. Both A.J. Green and Tyler Eifert are considered among the best at their respective positions, and Giovanni Bernard is as dynamic as they come out of the backfield. You don’t exactly have to possess a Lombardi level knowledge of the game to see that the offense is significantly more explosive when all four are suited up. So much more explosive in fact, I was compelled to research our offensive success and Andy Dalton’s effectiveness in games played with Eifert, Green, and Bernard all in the lineup as opposed to games without. Here are my findings:

Note: This data takes into account every COMPLETE game in which Dalton started under center and Tyler Eifert, A.J. Green, and Giovanni Bernard all participated including postseason games which are denoted with an asterisk. Games against opponents that went on to make the playoffs are highlighted in red. 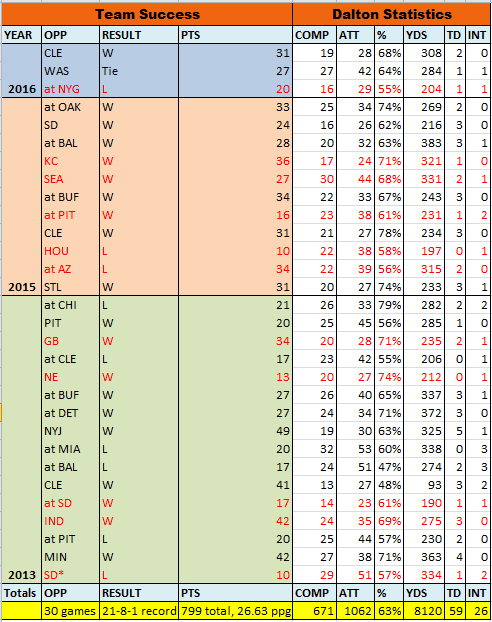 Now compare those numbers against games in which Dalton started under center and either one or more of that same trio did not participate. 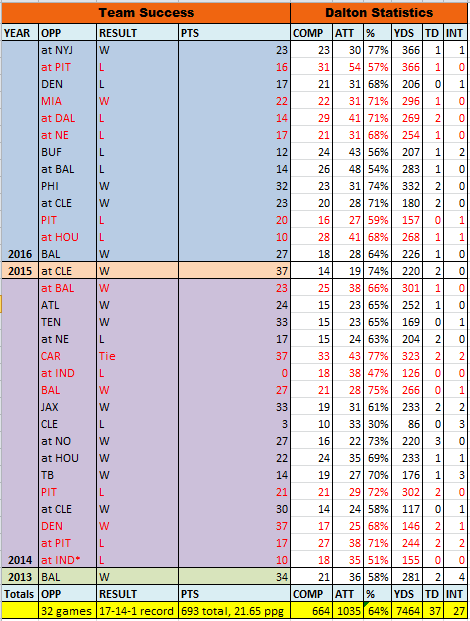 The most noteworthy discrepancies that stood out to me are as follows:

1.) Dalton, Green, Eifert, and Bernard have only played a grand total of 30 games, less than two full years together in 4 NFL seasons. Not ideal.

3.) The Bengals are essentially scoring an extra TD per game when Dalton has all of the weapons at his disposal as opposed to a limited arsenal. How many non-wins were decided by just one score this year alone? (Seven. The answer is seven).

4.) Against playoff teams, we’re looking at a 7-4 vs. 4-9-1 split. Significant because that debunks the “Bengals can’t win in Primetime or vs. good teams” rumor. 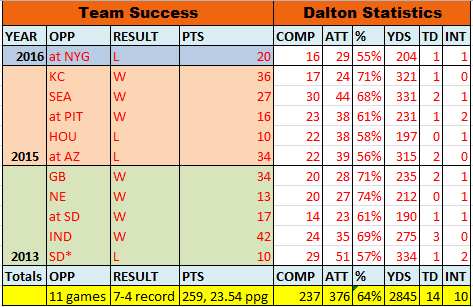 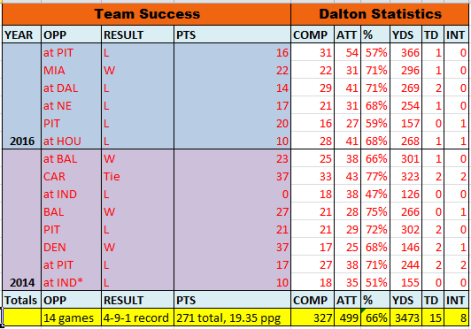 5.) Last but certainly not least, are the difference in Andy Dalton’s individual statistics.

Dalton has played a total of 32 games without one or more of the subjects, which splits up nice and even to the equivalent of two full NFL seasons.

For reference, Dalton’s single season average without Eifert/Green/Bernard is almost identical to Cam Newton’s 2016 numbers. Newton was the 28th ranked passer in the NFL this year.

For reference, those numbers are almost identical to Andrew Luck’s 2016 season. Luck finished as the 9th rated passer in the NFL.

Obviously football games aren’t won with Microsoft Excel and a TI-39. They’re won with physical play and proper execution on the gridiron. That being said, these numbers indicate that when Andy Dalton is surrounded with top flight offensive talent, he’s capable of generating the kind of  top flight individual AND team numbers on par with some of the best and most successful quarterbacks in the game today. The problem the Bengals face is that injuries and the departure of key free agents have limited Dalton’s exposure to elite offensive talent and forced him to work with players that are “just another guy” for lack of a better term. By adding more talent at the skill positions on offense, the Bengals could theoretically have someone to step up and fill the void in the likely event that one or more of Dalton’s primary weapons goes down. And if everyone is healthy and firing on all cylinders? Goodnight.

Drafting a guy like Mike Williams, Corey Davis, Leonard Fournette, Dalvin Cook, or O.J. Howard with the 9th pick could provide the Bengals with the type of firepower necessary to make an immediate and noticeable impact. I wouldn’t even mind taking a guy like ArDarius Stewart or JuJu Smith-Schuster in the second if they feel defense, OL, etc. is the way to go at no. 9.

Free agency isn’t out of the question either. I’m not crazy about that idea because the Bengals haven’t had the greatest luck with free agent WR’s *cough* Antonio Bryant *cough* Laverneous Coles, but the Bengals have the cash and names like Alshon Jeffery, DeSean Jackson, and Kenny Stills will be available.

If the Bengals want to become a real competitor again in a hurry, it’s imperative that they add another big time weapon on the offensive side of the ball. Or they can just draft another CB to sit the bench for three years before finally sniffing some reps in our nickel package. Their choice, not mine.